Some Acceptable, Some Less So 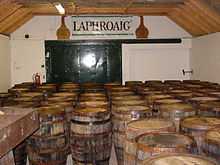 Some people prefer bourbon whiskey, and some prefer Scotch. Some people like Irish whisky, and if you were lost in the Arctic circle you might drink Canadian. Some people will only drink single malt, the crème de la crème of Scotch whiskies. I personally believe that there are different whiskies for different moods, and this is ultimately a subjective affair.

If I'm in a film noir mood I'll drink bourbon, preferably Maker's Mark. This is the whiskey for turning off the lights, gazing out the window at the passing cars, and brooding about the past. Bourbon is also the whiskey for the mood of vengeance, and the mood of drinking until someone makes you stop, but I no longer drink in either of those moods.

The mood for blended Scotch is any occasion where you would wear a bow-tie. As I do not own any bow-ties, I never drink blended Scotch.

The mood for Irish whisky is St Patrick's day, any time you plan to listen to the Pogues or the Dropkick Murphys, or if you are planning to have a drunken stick-fight. It is also appropriate for wakes and weddings, as these are traditionally indistinguishable from drunken stick-fights.

The mood for any other type of whiskey is if you don't have any money, all the liquor stores are closed for some reason, or you are otherwise prevented from acquiring any whiskey at a crucial moment when it would ordinarily be required. If this occurs, and you should accidentally stumble on your grandmother's hidden bottle of rotgut whiskey after a desperate half-hour search, then that is the mood in which you may drink it.


Add Water Or Not?