Chocolate and Vodka: What could possibly be better? 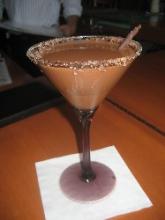 I was initially more than a little doubtful about the very concept of a chocolate martini, partially because I rather like both the traditional gin and vermouth martini and the vodka martini. I thought of martinis as a savory, not a dessert. But then I tried a chocolate martini in 2008, at a hotel bar. I liked it; it was very clearly more of a dessert than a cocktail, but it was chocolate. I've since experimented with chocolate martinis and have engaged in diligent research on your behalf.

In addition to vodka, the liqueurs used to enhance the chocolate aspect of a chocolate martini include Crème de Cacao (note that Crème de Cacao comes in colorless and colored versions), Godiva chocolate liqueur, Cask & Cream Chocolate Temptation, or Bailey's (traditional or chocolate flavored). Garnishes include shaved white and / or dark chocolate, cocoa or chocolate syrup on the rim, Hershey's kisses, or slices of Terri's Chocolate Oranges.

As usual with vodka martinis, the vodka needs to be chilled; stash the bottle in your freezer, with a couple of glasses. A purist would want you to shake or stir the cocktail over ice before pouring the chilled mixture into your chilled martini glass. That said, the basic chocolate martini is made with two ounces of vodka, and one ounce of liqueur. Alternatives to this basic chocolate martini recipe include using one ounce of chocolate vodka, and one ounce of another flavored vodka—typically vanilla or espresso/coffee flavored vodka, but there are a number of other possibilities, including citrus or orange, or raspberry, with an ounce of whatever liqueur you prefer. Personally, I find Bailey's a little too sweet, and prefer one ounce of colorless Crème de cacao and two ounces of Godiva Chocolate Vodka.